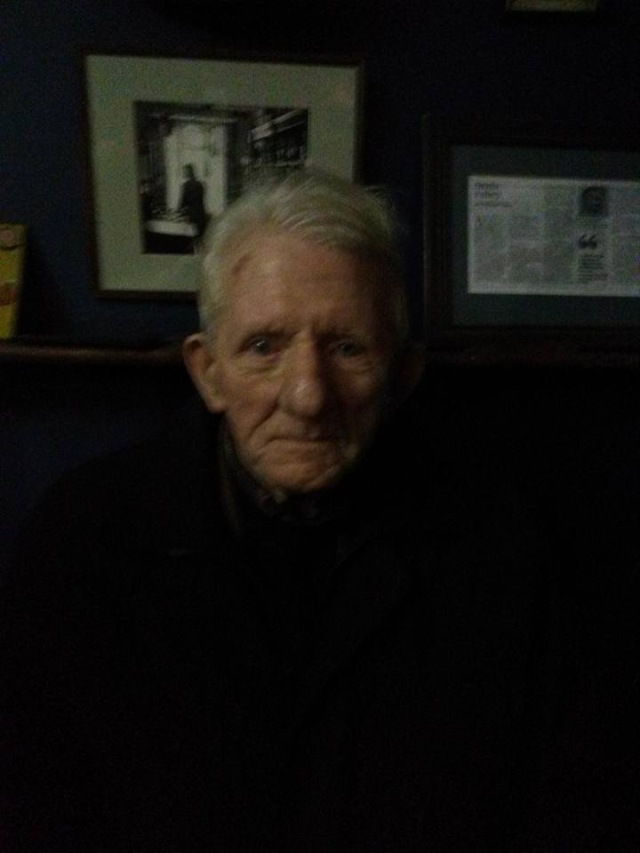 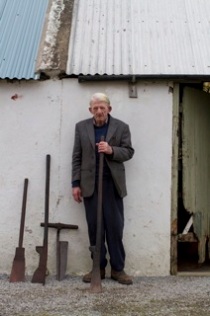 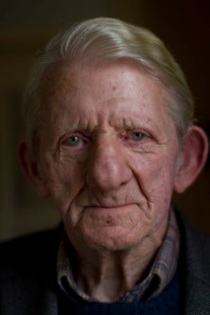 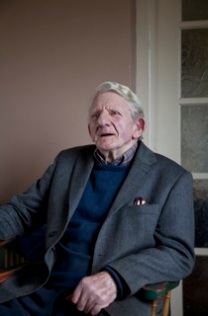 ‘T’was only the country children would go to school barefoot. You’d never see a town child go barefoot. On 1st October, we’d put the boots on again but our feet were so hard by then that we could nearly walk on glass or thorns. And now I couldn’t even go out to the doorstep barefoot!’

Din’s school was in Glin, one and a half mile away from the small farm where he grew up. He wasn’t crazy about school. ‘It was just like ‘A Song for a Raggy Boy’ if you ever saw that film?,’ he says, his fists inadvertently clenching. ‘We had two teachers the very same and if you made any complaint, the priest was as bad as either of them. [i] None of us reported when we’d be beat at school because our mothers and fathers would hardly believe us. One of the teachers had a bamboo cane and was always looking for an excuse to give you a few slaps of it with a full, living belt. Two or three times a day maybe. For what? For nothing, for small things. I just don’t know what sort of attraction or satisfaction they got out of it.’

It is discomforting to see an octogenarian still writhing at the memory of psychotic school teachers. But Din Lane is one of those who believes that the exposure of abusive teachers can only be a good thing, that surely such cruelty is now at an end.

Din stayed at national school until he was fifteen. ‘Everyone was counting the days before they were fourteen because then you could leave and the teacher couldn’t touch you. But even though Monday to Friday was like a month, I wanted to learn. And I was kind of lonesome to be leaving school. So I kept going as long as I could and when I was sixteen, I went to secondary school for a year. That one year was better than the five I spent at the national school.’[ii]

Denis Lane, known as Din, was the second youngest of seven children. His mother Elizabeth Faley was a farmer’s daughter from Killeaney just south of Glin. As a young woman she emigrated to Pittsburgh where two of her sisters and two of her brothers were living.[iii] She found work in a hotel but when word arrived from Ireland that her mother had taken ill, she took the momentous decision to return to her homeland.

In 1909 she married Paddy Lane, a farm labourer and Limerick county council worker who lived at Carrickkerry in Glensharrold, West Limerick. In 1888, when Paddy was a boy, Glensharrold had experienced one of the darkest episodes of the Land Wars when mounted troopers cleared over 25 tenants out of the townland. Paddy and Elizabeth settled in the townland of Clonoughter outside Glin where they raised six boys and a girl.[iv]

Din was a baby when his twelve-year-old sister Betty contracted pneumonia in January 1924.[v] When he recounts her sad tale, he adopts the role of narrator as well as the guise of the two key characters, being his father and ‘Old Dr. Barrett’. The latter had only just arrived in the area so that ‘every house was strange to him’. When he learned one of his neighbours had a girl sick with pneumonia, the doctor cycled over to their house as fast as he could. Hope was in his heart because he believed he had a cure for her. He arrived at the house in the mid morning and asked ‘Is this Lane’s?’
‘It is’.
‘You’ve a little girl who is sick. What way is she?’
‘She’s dead Doctor’.
‘Oh Jesus. And I have the serum here with me.’

Paddy Lane and Dr. Barrett remained friends for life. Unfortunately the doctor was to perform autopsies on two more of Paddy’s children.

Din’s brother Mick was 35 years old when he drowned in Foynes. He had been walking by the boat slip on a grim winter’s night and slipped into the water. ‘His trousers were torn at the knees from trying to get back up the wall’, says Din. ‘He wasn’t got until the following day’.

Another brother Jack died young following an epileptic fit. Din found him just as he was breathing his last, lying in a sandpit near his house. The wind was wild that evening and, as Dr. Barrett later explained to Din, the fatal attack was brought on when Jack accidentally inhaled some of the blowing sand grains.[vi]

Din’s house sits on a hill above Glin, surrounded by corrugated sheds full of old peat tools and Honda 50s, and large bales of silage wrapped in shimmering black plastic. Across his carefully tended garden beds, the view rolls down to the Shannon Estuary and Labasheeda, the bed of silk. His older brother Paddy built the house with his bare hands. ‘He had no cement mixer, no electricity and all the stuff was tossed with a shovel. He even built his own blocks but he had the whole thing finished nearly as quick as four or five men would build it now. He started on 13th May and he had it finished in November.’

After he left school in 1941, Din began working in the locality, helping farmers with their dairying and hauling cattle. In 1948, he and his brother Morgan acquired a Fordson lorry and put it on the road.

‘Turf was our main business’, he explains. ‘We’d cut a lot of turf. We’d start in April and be cutting for a month. We’d sell it then around east Limerick, to all the farmers, Rathkeale and places. A lot of people here had people in Limerick City and I’d carry turf down to them.’[vii]

‘It was hard work. We were on Joe White’s bog by eight o’clock every morning from the end of March. We often used to make our dinner with a fire out in the bog. If we were out of butter we’d go into Glin on our way, but we’d be there a half an hour before anyone else would get up! The shops in Glin wouldn’t open until 8 o’clock at the earliest’.

The brothers would stook the turf and leave it to dry for a fortnight. At length they would draw it up to the roadside, load up the Fordson and head off to sell it. ‘But the changes that are there now!’, he says, shaking his head. ‘A good big lorry would get you £12 at that time. Now they’re getting 300 Euro for a small cart-box load! We had five times that amount in our lorry.’

‘Nobody else had a tractor so we used to be very busy drawing.[viii] Most of the famers only had a horse and creel which was too slow for getting turf.’ While there were four lorries in Glin by 1950, two had licences to bring Guinness and other merchandise to the pubs, leaving the Lane brothers with their turf monopoly intact. Things changed when farmers began to get their own tractors.

When he wasn’t harvesting turf, Din and his wife Mary were raising their five children. Two of their daughters are married in America meaning that the 88-year-old turf-cutter, who never once left Ireland in the 20th century, has visited the USA five times in the past decade. As a younger man, he loved to play the accordion and take his Honda 50 for a spin. In latter years, he has tended to his garden. ‘I do a lot of gardening all the time. In fact, I have two gardens now. I’m only waiting for April so I can start planting potatoes and turnips and cabbages.’

With thanks to Bernard Stack and Eoghan Ryan.

FOOTNOTES
[i] ‘We had two teachers you could compare to that. There was an industrial school here in Glin too. You hear it on the radio now, what they went through. There was a lot of it cloaked up. The priest would back up the teacher. And your father and mother – none of us reported when we’d be beat at school because they’d hardly believe us. And if you made any complaint, the priest was as bad as the one on the television. Father Lyons. He lived to 104 or maybe even 106 and finished up at Rathkeale. He used to play football with the Glin team. He was a wicked man on the football field too! He wasn’t a great favourite’.

[ii] The secondary school was beside the bank in Glin, at Dore’s.

[iii] ‘There was a lot of emigration from Glin to America at that time – to New York and Cape Cod and places. But they went to Pittsburgh. She worked with two black girls and said they were very nice.’

[iv] The brothers were Patrick, Morgan, Jack, Mick, Dan and Din. The sister was Elizabeth, or Betty.

[v] ‘I was born a small bit up the road. I had five brothers and one sister. She died at the age of 12 of pneumonia. We had an old doctor here – my father was good friends and often drove him around – old Dr. Barrett. We’ve another Dr. Barrett here now. But old Dr. Barrett lived back on the road to Tarbert. I was only 11 months when my sister was 12, going to school. Old people at that time didn’t know what pneumonia was. They thought it was flu or a cold. An uncle of mine was with my father that night. He put her to bed at 9 or 10 o’clock in the morning and he went in, in the morning and she was dead.’

[vi] ‘We were coming from the bog in the month of April. We were cutting turf. My brother had one of these hand block makers. He was making blocks for to build this house. I had a lorry at that time and we were coming from the bog. I had another brother who had a small house by Culhane’s Cross. We pulled up there with a load of blocks. It was raining and we went to see the brother he was missing. We went searching for him. We checked the well; that was the first place to look. He used to get epileptic fits the odd time. He’d know and he’d sit down. He was a great man to work and all. But he was making blocks and he had very fine sand across the road. The brother went out for a call of nature or something – there were no toilets at that time – and he went to the sand and sat down. It was a grand, wild evening. I just found him and I picked him up as he was drawing the last breath. If it happened now, there’d be an in inquest. But Dr. Barrett could prove that the sand was very fine and dry and he inhaled the sand and got smothered. Dr. Barrett had a spoon and found the sand. The sergeant wanted to hold up the removal for ages to make an enquiry but Dr. Barrett went against him and said he knew the cause of death.’

[vii] ‘I cut turf for a man in Glin who was married to a woman from Golden, 8 mile above Tipperary, and I carried a load up there one time’.

[viii] ‘When I was drawing to farmers, I used to have a book even, to put them in a row, to see who was next, and the one’s at the bottom would want it next.’

Din reckons there are only four or five in the parish who are his age, including Phina McGrath, Michael Egan and Moira Reidy.

This entry was posted in All Glin News..., Church & Parish, Historical Society, Library, Local Notes. Bookmark the permalink.
%d bloggers like this: